poetigress poetigress), answers some searching questions about herself and her work. Which came first, the title or the idea?
In this case, the idea came first. "Bear" is a story about a state-of-the-art A.I.-type educational toy who grows up alongside the child he was bought for, and ends up having a much deeper relationship with her than either of them expected. The "clockwork" aspect was something of a reference to The Velveteen Rabbit -- the idea that love makes you Real.

How many times did you change the title before you settled on THE BEAR WITH THE CLOCKWORK HEART?
On the page where I was brainstorming titles, it’s the fourth one down -- THE CLOCKWORK HEART was first on the list.
The ironic twist to all of this is that, since submitting the title for this year's Puddle, "Bear" has sold and is forthcoming in Strange Horizons, but it's slated to appear under the title "The Bear with the Quantum Heart." There was some (justified) concern that "clockwork" gave too much of a gear/steampunk feeling that didn't suit the story, so I suggested the alternative. (But let's be honest -- to have a story in Strange Horizons, I would probably have agreed to title it "Percy the Dancing Frog.") ;)

As a reader, does a good title make a difference to you?
Absolutely. A good title piques curiosity; it's more than simply a label or a handle. It's kind of a Pied Piper leading us into the story, and when it works well, it gives that first hint of what might be in store, and then becomes even more resonant when the story's complete.

What’s your preferred genre/wordcount?
Genre -- mostly fantasy and soft science fiction, though with a range of tones and styles. Wordcount... That's kind of in flux at the moment. Over the last decade or so I've been most comfortable with short stories, usually about 2,000 to 10,000 words. Lately I've been pushing myself both longer and shorter -- my first novel was a big learning experience in terms of working with a broader canvas, and I've also been experimenting with flash pieces around 200 to 1000 words. So right now, the short story is still my comfort zone, but I'm starting to learn more about the advantages and disadvantages of working longer and shorter.

What’s your current WIP?
As usual, I have several. :) The main one at the moment is SIGNAL, a novella set in a post-human future, when an anthropomorphic raccoon-like creature finds a cell phone while foraging for food.

Are you a pantser or an outliner?
For anything shorter than a novel, I tend to just plunge in and see what happens, and then shape things later on. For novels, even when I'm working in a NaNoWriMo setup, I have at least a loose outline and a list of possible scenes. So far, novels are just too big for me to keep a feeling of the overall structure and pacing in my head without having some kind of structure thought out from the start.

Tell us about your last sale.
My last sale was actually a reprint sale of my 'werewolf' story, SWEAR NOT BY THE MOON, to a wolf-themed anthology. Reprints aren't always as exciting as selling a story for the first time, but it's still satisfying to get a story out to a new audience.

Tell us about your first novel, By Sword and Star, which came out this year.
It’s an anthropomorphic medieval fantasy (one reviewer called it a "fairy tale" type novel) that tells the story of the unicorn prince Tiran, who has to regain his rightful place as ruler when the elk-lord, Roden, kills his family and takes over the throne. It's got romance, a bit of magic, warrior wolves, fighting squirrels, and a big saber-tooth cat, among other elements. It's aimed at teen and adult readers, particularly the older teens and young adults who grew up reading animal fantasies like Redwall but are interested in something with more mature themes and concepts. 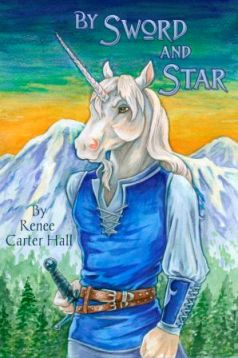 What was the last story/novel you pitched/submitted?
The other day, a story, THE CLAW IN HER HEART, came back to me, so I sent that one out again. It's something of a dark take on Narnia-esque portal fantasies, and it's also one of the few stories that I really had trouble finding the right title for. To date, I've sent it out under three different titles, and I'm still not 100% happy with the current one.

Which author has influenced your writing the most, and why?
I don't know any way to choose just one! I deeply loved Beatrix Potter's stories as a child, so I can see echoes of those at times. I read a lot of Stephen King books from about age 10 on, and I know I absorbed more there than I'm probably conscious of in terms of craft. Lois Lowry's humor sneaks in sometimes; I loved her Anastasia books as a kid. And anyone reading By Sword and Star will see Brian Jacques' influence. I also take a lot of inspiration from film and animation, so that's why I list people like Steven Spielberg, Chuck Jones, and Jim Henson as style/storytelling influences as well.

What was the last story/novel you read?
E. M. Forster's The Machine Stops, which struck me as one of those science fiction stories that might be more relevant now than it was when it was originally published. (It's available free at Feedbooks).

If you could send a letter back to yourself when you were just starting out as a writer, what advice would you offer?
Mmm… I don't know. Offering advice carries an implication, to me, that I would have done things differently, and I don't know that I would have. I might tell myself that every step of the journey is going to take much, much longer than expected, but then I would just depress my younger self. And I probably wouldn't listen anyway.

How do you deal with rejection letters?
They're a disappointment, of course, but when I start sending a story out, I make a list of several markets at a time (typically starting with pro-level and working my way down), so when a rejection comes, it's just a matter of moving to the next place on the list.
Something else that helps me is remembering that sometimes it's better to be rejected than accepted. Several months back, I had a short story accepted to a market that fell through, but after sending the story out again, it sold to a far better place than the original venue. That sort of thing has happened more than once over the years, so I try to tell myself that maybe the story has an even better home waiting for it, if I can just be patient enough to find it.

What’s your favorite aspect of writing?
Getting lost in the story, seeing and feeling it through the characters, losing track of time, coming back to reality with tears in my eyes or heart pounding -- like dreaming of a flower and waking up to find it in your hand, that ephemeral sense of having been somewhere else, and now something exists that didn't exist before. In essence, that sense that I'm doing what I was born to do, that makes this more important than a hobby and more intensely personal than what I tend to think of with the term 'career.'

Where can readers find your work?
For those who've never read my work and would like a bit of a sampler, I have a free short story collection, SIX IMPOSSIBLE THINGS, available on Smashwords. By Sword and Star is available in print, Kindle, and epub formats -- all those links are at the publisher's website. And for a taste of my darker fiction, my short story, HORSEMAN, is in the current issue (#29) of the horror magazine Black Static.

Where on the web can you be found?
The one-stop shop is my personal website, www.reneecarterhall.com. I'm also on Twitter (@RCarterHall) and Goodreads, and I have an author page on Amazon. I don't blog in a formal sense -- I'm really not good at it -- but I do have an online journal (http://poetigress.dreamwidth.org), and that's the best way to keep up with what I'm doing.

Renee Carter Hall works as a medical transcriptionist by day and as a writer, poet, and artist all the time. Her short fiction has appeared in a variety of print and electronic publications, including The Summerset Review, New Fables, and the anthology Bewere the Night. She lives in West Virginia with her husband and her cat, both of whom serve diligently as beta readers. (If the cat falls asleep on the printout, it's good.) Readers can find her online at www.reneecarterhall.com.